Ironman Florida - What an awesome experience, and definitely one I will never forget!  This was my first ironman and the toughest thing I have ever done.  Really...nothing even comes close!  I had many ups and downs, I almost quit, my body was a complete wreck, but ::SPOILER ALERT:: I finished. :)

A summary of how my day went:

Ironman week started with an overnight flight from SFO to Fort Walton Beach, FL.  I needed to be there Thursday for checkin, and with a midterm on Wednesday, the only way to do it was by taking an over priced, cramped, no-chance-for-sleep, redeye flight to the race venue.  But damn was it worth it.  When I got to my parent's condo at 10am the next day, I had this waiting for me: 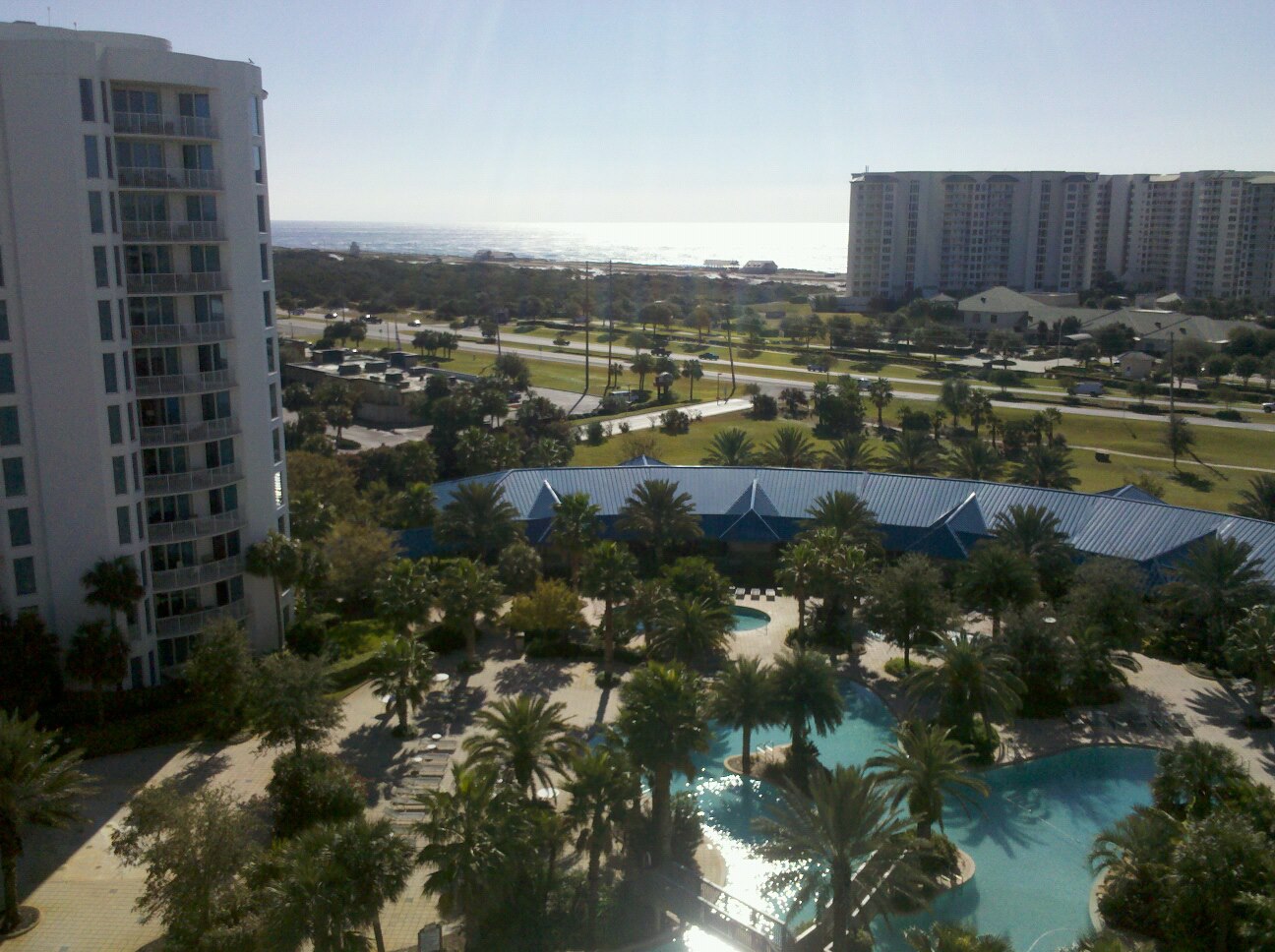 After getting unpacked, I went for a short run, picked up my packet and bike, did a short bike ride to make sure everything was good to go, and then it was nothing but relaxation until the race.

Saturday morning came...slooooowwwwly.  I have a curse: It's the "You will never sleep the night before a race" curse.  To this day, I have not gotten one second of sleep before a race.  Big or small, long or short, sleep I do not.  After laying in bed for seven hours, the alarm went off at 4:30am - Go time!

Oatmeal + blueberries, banana, salt thing, dressed, and on the road by 5am.  We got to the transition area just before 6am, and much to my disappointment, I had a mile+ frantic jog to drop off special needs bags and finalize my transition.

At 6:25, my bike was good.  Five minutes to spare before the transition closed?  Dang, not bad!  Time to chill for 20 minutes before the start of the longest day of my life.

Taking my sweet time getting ready for the start: 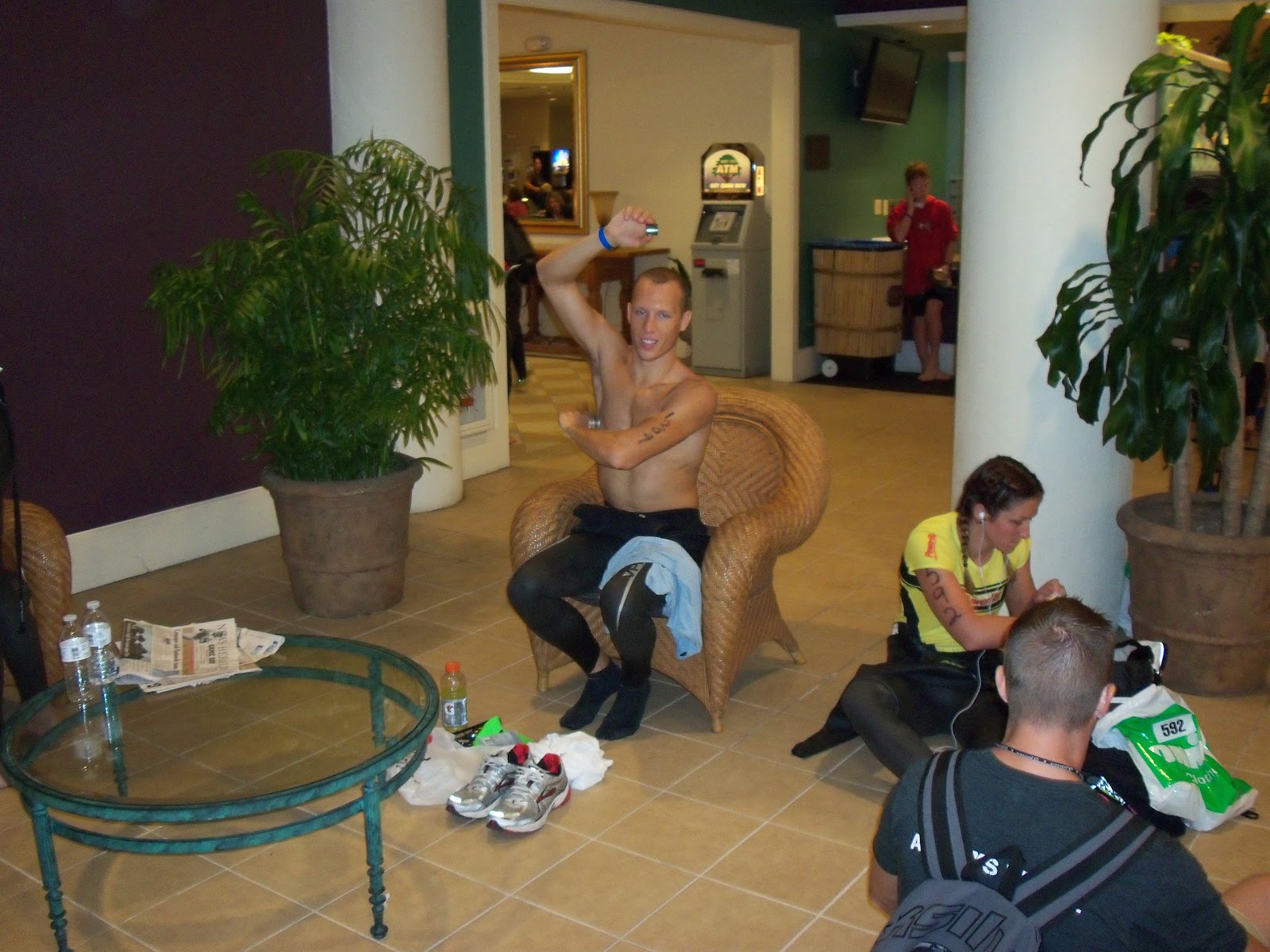 At 7am, the gun went off, and it was ass kicking time!  Or rather, GET my ass kicked time!  Crazy waves caused people to swim in every direction BUT straight which meant it was a very physical start.  Kicks, punches, body checks - all the usual stuff.  Outside of that, I'd say the swim was pretty uneventful.  Not knowing what to expect later in the race, I took things pretty relaxed.  Somehow I squeaked in under an hour (59:59,) so I was pretty stoked about that.  What I wasn't stoked about was how my wetsuit wanted to eat me alive!  I felt a slight burn on my neck and back, and I didn't realize until later, but they were pretty bad.  Oh well, life goes on... 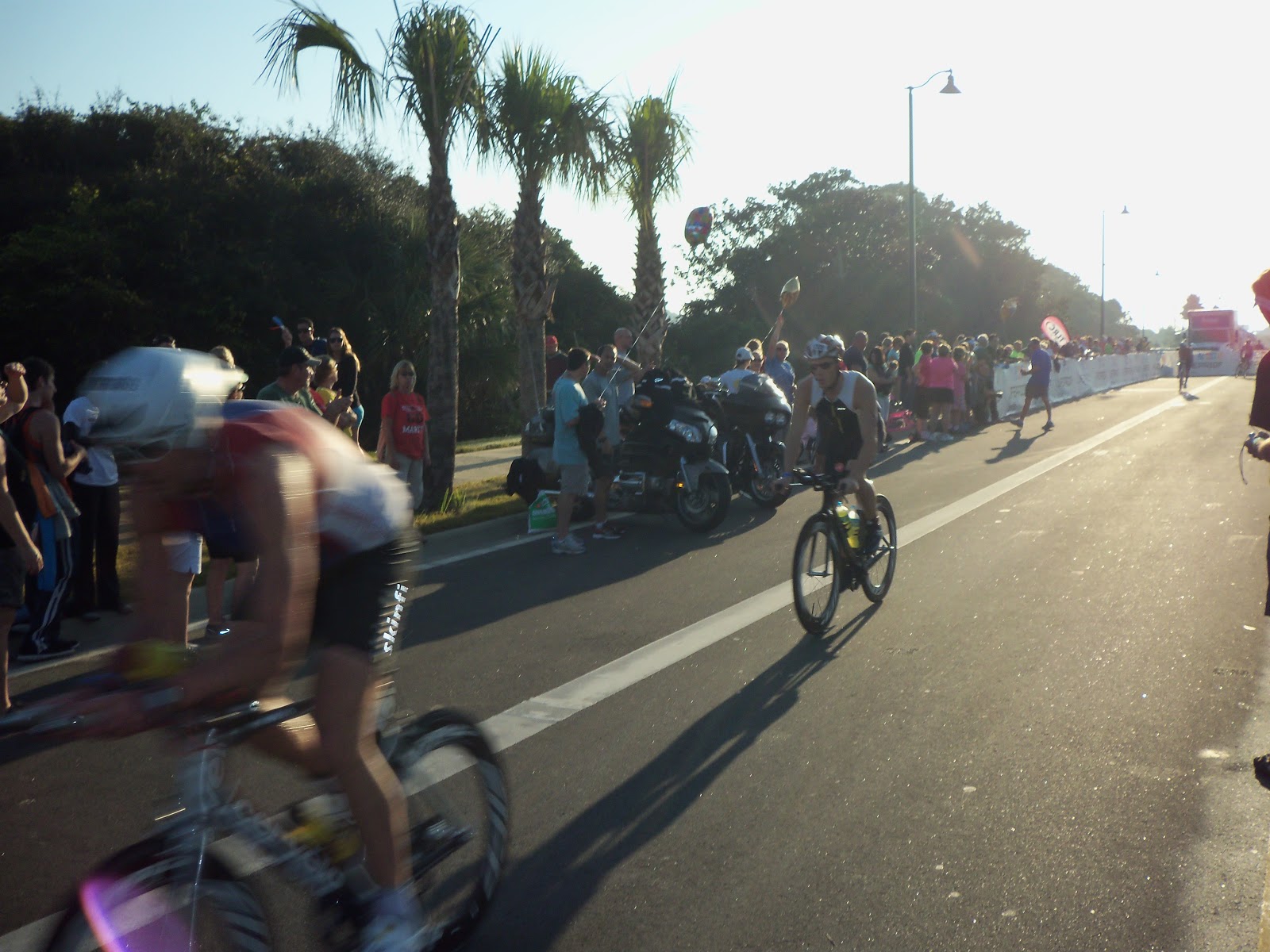 The bike started VERY relaxed.  I set a totally arbitrary goal of hitting a 200w average which meant the first couple hours felt almost too easy.  My nutrition goals were pretty arbitrary as well: "Drink as much Perform as humanly possible; take a salt thing once per hour, eat a honey waffle when you're sick of Perform."  And except for getting my body rattled to pieces on the road by the halfway turnaround, the bike was going well!  I felt like I had a tailwind in every direction, and I was rockin' 22mph+ on ~205w!  Life was good!

...until mile 70 or so.  Then my stomach took a noticeable hit.  I still felt alright, but I was only able to drink water.  Kind of.  Ok for now, but bad news for later.  At mile 90 we turned into a headwind, and without any calories for the past hour, my body was in pretty rough shape.  180 watts was tough to hold, I had no appetite, and worst of all, my crotch was on fire (thanks TSA for the 3oz limit - No Chamois Butt'r!!!)  Damn was I glad to get off the bike at mile 112.

T2 was not good.  Mentally and physically I was not in a good place.  I told my volunteer that I would need a few minutes.  After having a short picnic (7min T2,) I was out on the run...and walking.

I'm not sure how, but I saw a dude that I felt like I could keep up with.  He was running 8:20's, and it was working!  For 9 miles, my new friend Mike and I practiced good ironman pacing - something that would save my life later!

At mile 9, my body said it was time for plan B: run until you're about to cramp, then walk until everyone you just passed repasses you, then run again.  Rince, repeat.  It turns out this strategy was a good one!  26 miles later, it was MY time in the finisher's chute.  Visor -> backwards, sunglasses -> up top, grinning like a zombie, and sprinting a blazing 9min mile pace to the finish line, I was finally an ironman.  After dreaming for 12 years and training for 2.5, I finally had the hardware to prove that it was all worth it. 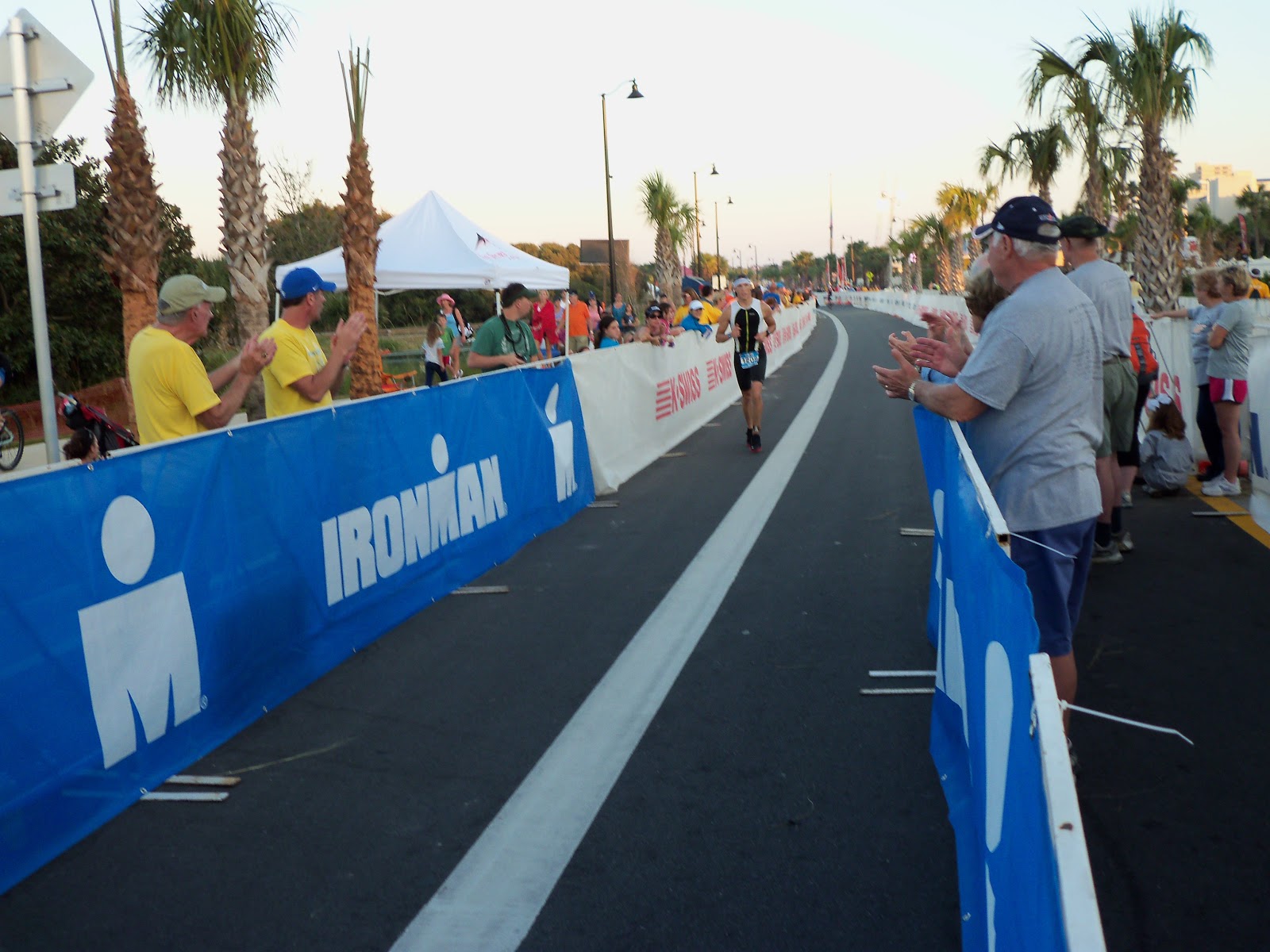 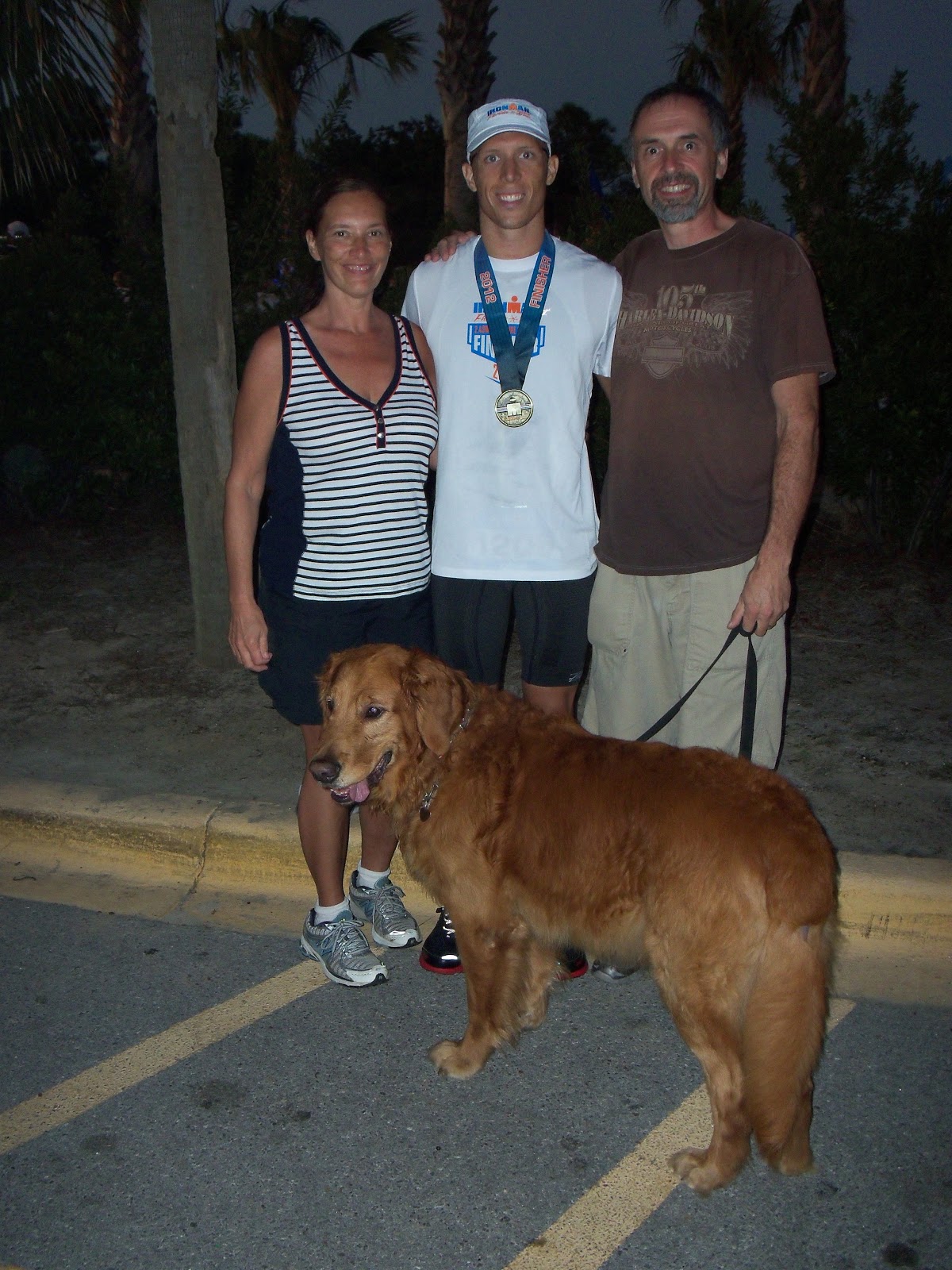 Anyone that does this kind of stuff knows that you can't do it alone.  Without a throng of supporters, I would not have been able to do any of this.  Here's my list:

1.) My parents and Aunt Carol - My biggest fans, always.  Thanks for taking time off, driving 15 hours to FL, and letting me stay in your awesome condo.
2.) Jay - Easily the most generous and awesome guy I know.  Thanks for letting me borrow the BEST possible bike that I could ever race on.
3.) My 508 training buddies.  Saturday morning long rides are way easier when I have an awesome group of people to do them with.
4.) Dirk - The craziest dude I know.  Fearless.  This guy planted the triathlon seed 2.5 years ago.
5.) All of my other awesome training buddies: Dan, Jamii, Dave, Kirt, Mike, and many others.  Training with people is WAY easier than training alone.
6.) All of my friends that come to my races and cheer for me.  I can't disappoint if people are watching!
7.) The internet.  This is probably my biggest source of inspiration.  Seeing others accomplish the impossible fuels my fire.

How to be a blog reader (efficiently!)

So this totally blew my mind, but apparently most people don't know about one of the most awesome features of the internet.  It's called: Google Reader

If you have a gmail account, then you have Google Reader.

What is the point of this wonderful device?  Well, imagine a world where you follow quite a few blogs, and to get updates, you bookmark each and every one of those websites.  Don't you get disappointed every time you go to a blog and don't find any updates?

Google Reader SOLVES that problem!  Instead of going through 20 different links to get your blog updates, just link them in your Google Reader, and visit ONE link every day!  Blogs send updates TO your reader via this thing called RSS.

Here's how it's done:

4.) Add a Reader link to your browser:

That's it!  Just visit your reader shortcut when you load up your browser and get your updates.

A few things to note: Note all blogs will give you a link to their feed.  Sometimes you need to look for this icon:

or you have to just manually add it to your reader by clicking the big read "Subscribe" button: 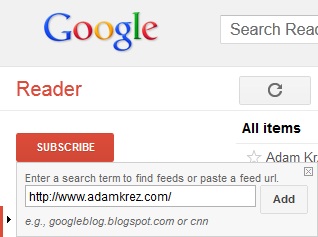 or in Firefix, the "Subscribe to: Posts (atom)" link at the bottom of a page will bring you to the "Add to reader" page: 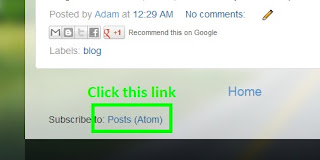 In another post, I will give a list the blogs I follow and why I think they're pretty great.
Posted by Adam at 1:07 AM No comments:

Why start a blog?

I've been thinking about starting a blog for a while, and after giving it some thought, I came up with three reason:

1.) Accountability: I don't know this for sure, but if you're forced to type about it and make it public, then you're probably more likely to do something.  And after it's out in the open, other people can keep you accountable.

2.) Record keeping: Occasionally I'd like to look back and see things that I've done and remember the details.  Keeping a written record of what worked and what caused epic explosions on the run seems like a pretty good idea.

3.) Keep in touch: As I travel through this crazy world, you inevitably meet lots of people.  Instead of sending out tons of different messages and emails, it'll be nice to just link them to this website.

4.) Meeting cool people: I'm always looking to meet awesome people.  I think everyone has some kind of interesting story to tell.  When I started reading blogs, I actually ended up meeting some pretty cool people IRL, so I figure it's time to pay it forward.

So there it is.  I'm hoping that, unlike many other blogs, updating this becomes a regular thing for me.  If it dies, it dies, but here's my best attempt.
Posted by Adam at 12:29 AM No comments: