After my less than stellar performance at Wildflower, I needed a boost.  So I thought: What better way than to immediately jump back into racing!  There was a local sprint triathlon that some friends were doing, so I figured it would be a great opportunity to have some fun.

Race morning started just like any other: 4:30am "wakeup" after getting ZERO sleep.  AARRRGHHHH - My body needs to learn how to sleep before a race!  Damn you body!  Despite feeling like garbage, I get on the road by 5:10 to make it to the race by 6.  Transition setup was pretty standard, but one major difference with this race was I actually did a warmup jog.  After Cal Poly a few months ago, I figured out the best way to ward off a chilly morning is to sweat a little.  And with 15min will party-time, I was nice and warm and good to go. 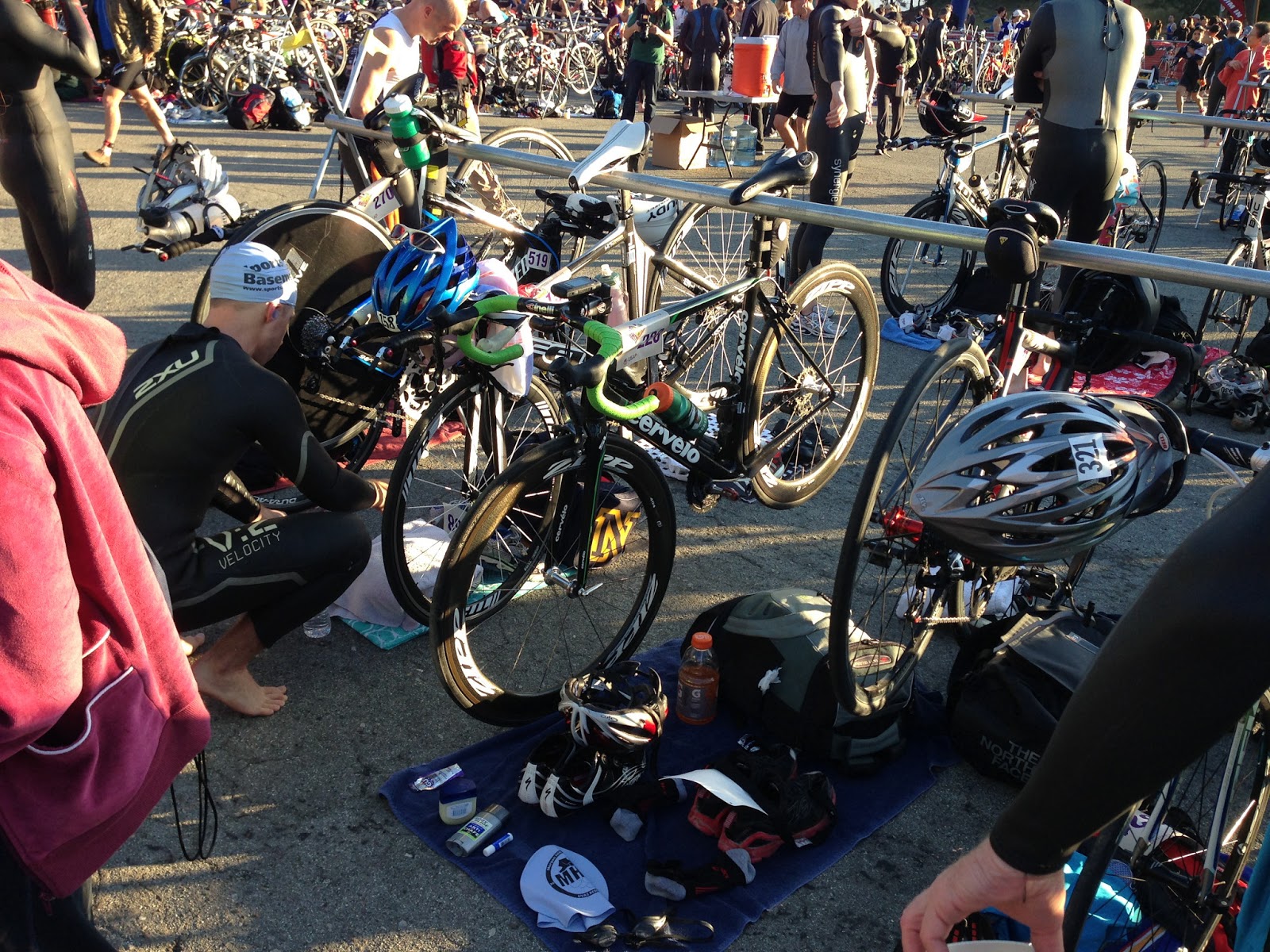 Swim: 18:23 - 2nd AG
Not sure how I managed 2nd in the 25-29 dudes.  I honestly felt like I had a pretty slow swim.  Why slow?  Good question...  It was, in my opinion, a really easy swim.  The buoys were easy to spot, and I wasn't ever duking it out with anyone.  I actually had clear water as far as I could see - it was great!  I LOVE swims with nothing but glass ahead of me.  I was convinced I was swimming straight, but according to my watch, I ended up going .84 miles instead of .75.  Bummer! 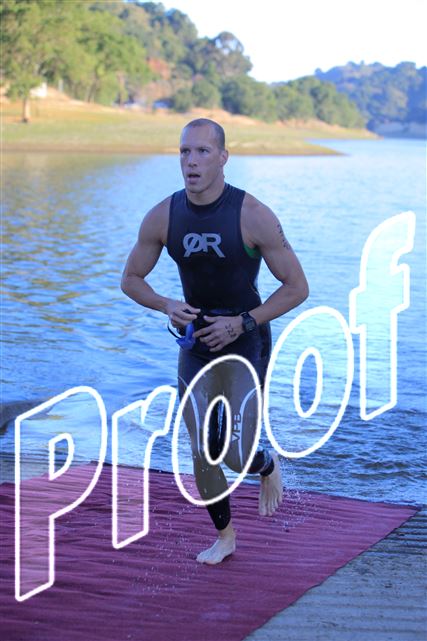 Bike: 45:26 - 5th AG
Out on the bike, things got a little lonely.  As far as I could see in front of me and behind me, I saw no one.  Curses starting in the first wave and swimming moderately fast!  Out of transition, I started doing work.  I have absolutely no basis for this, but I felt like I should be able to manage 270-280w.  So that was my game plan: Keep avg power in that range and get it done.  Around mile 4.5, I had a little incident where some busted up roads caused me to eject my only water bottle.  "Uh oh, I had better pick that up," I thought, so I did.  It cost me about 15 seconds, and at the time, it didn't seem like a huge deal.  The only guy that ended up passing me on the bike was the eventual winner - some dude with a MONSTER 39min bike split. 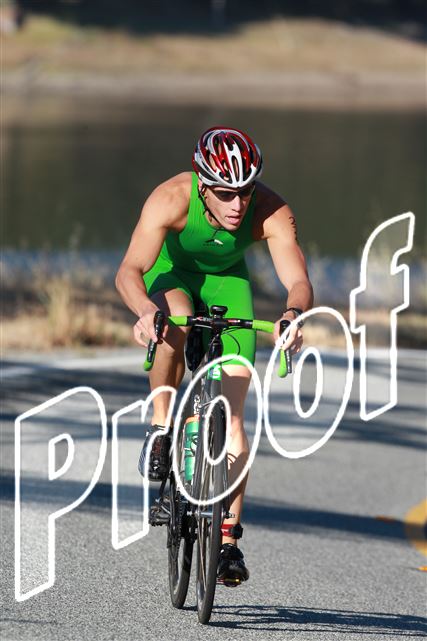 Run: 31:39 - 2nd AG
T2 was blazing fast.  36 seconds to be exact.  My Zoot shoes are totally ballin'!  Out of transition, I NEVER know how to run.  Three years of triathlons, and my sense of pace is all kind of messed up.  I thought I was doing 6:30's, but my first mile clicks off at 6:16!  Too fast?  Maybe, but I'm riding this out for all it's worth!  Five flat miles is cookies compared to what I usually do.  Sadly, same story on the run: No one in site. :(  I'd have to wait a bit until the turn-around to see where I stood. 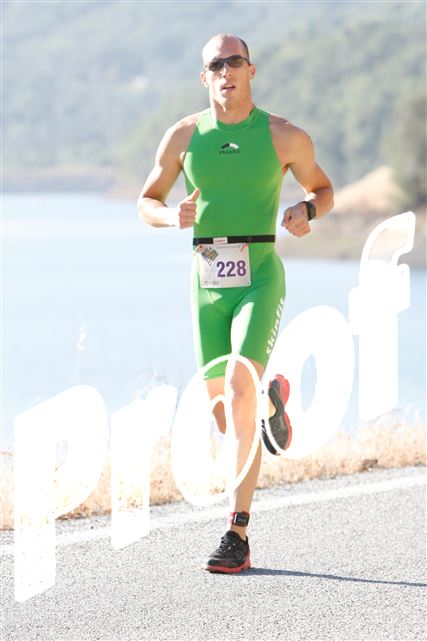 At the halfway point on the run, I counted five dudes.  I knew three were pro/elite which meant that I was most likely in 3rd.  Crap - if I get passed I miss the podium!  Instead of an easy cruise home, I had to pick it up...or at least maintain.  About a minute back was a guy that looked like he was kicking ass.  No idea what age group he was in, but I was running scared!  I ended up crossing the line without the need for a sprint finish.

Finishing second in my age group was pretty awesome.  This was the first time I "podiumed" in a triathlon.  Granted, I don't feel like it was super competitive, but it still feels good.  And the Petite Sirah that I won...that's going to feel even better. :) 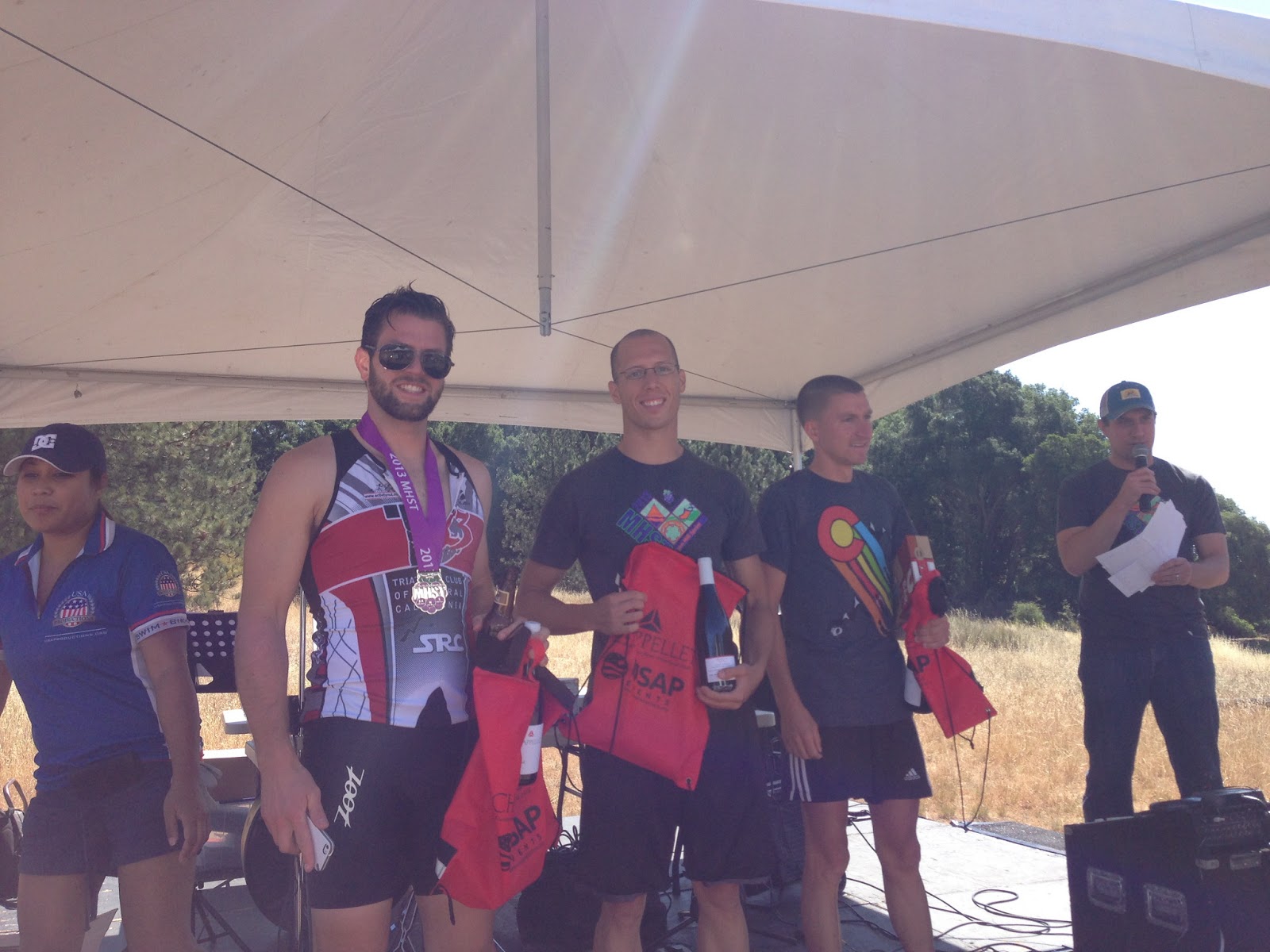 A few shout-outs before I sign off here:
- My friend Dirk was visiting from Malaysia, and instead of being heavily jet lagged, he decided to race a triathlon - badass!
- Work dudes: Always fun to have active people to train with at work.
- Dave B: Congrats on your first triathlon!  You killed the run!  Great to see you out there buddy.
- Olivia: Congrats on the overall women's win! 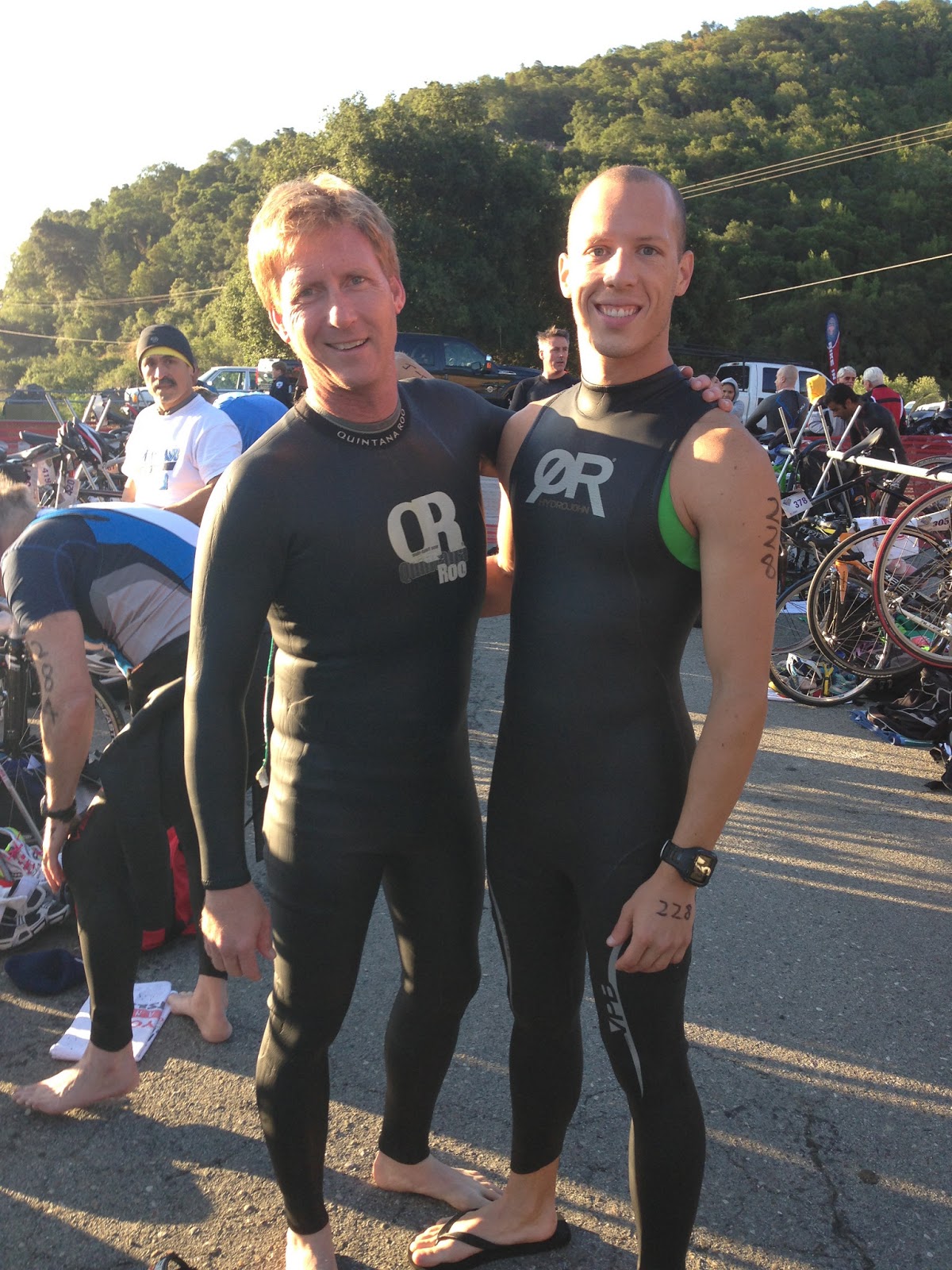 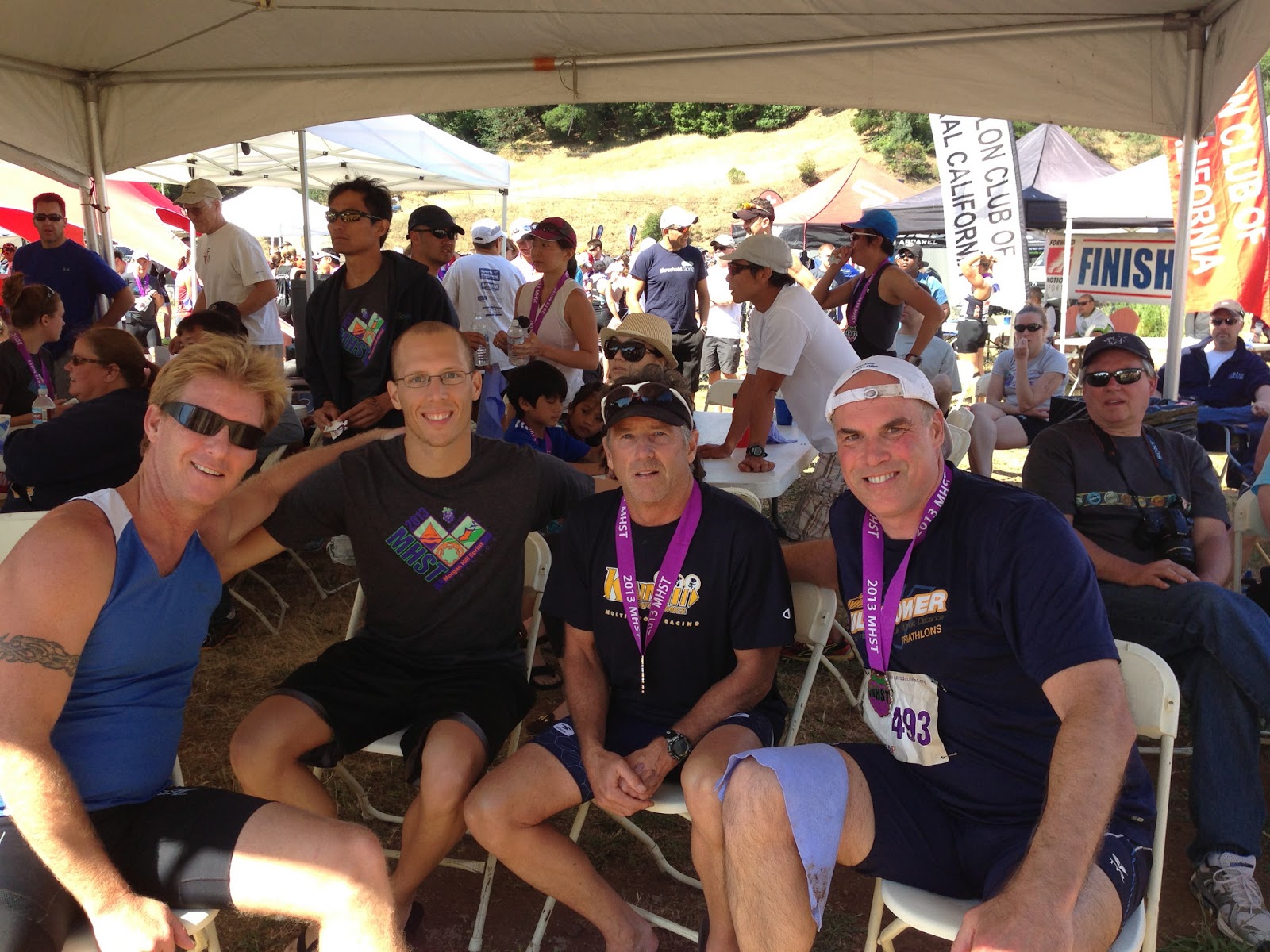 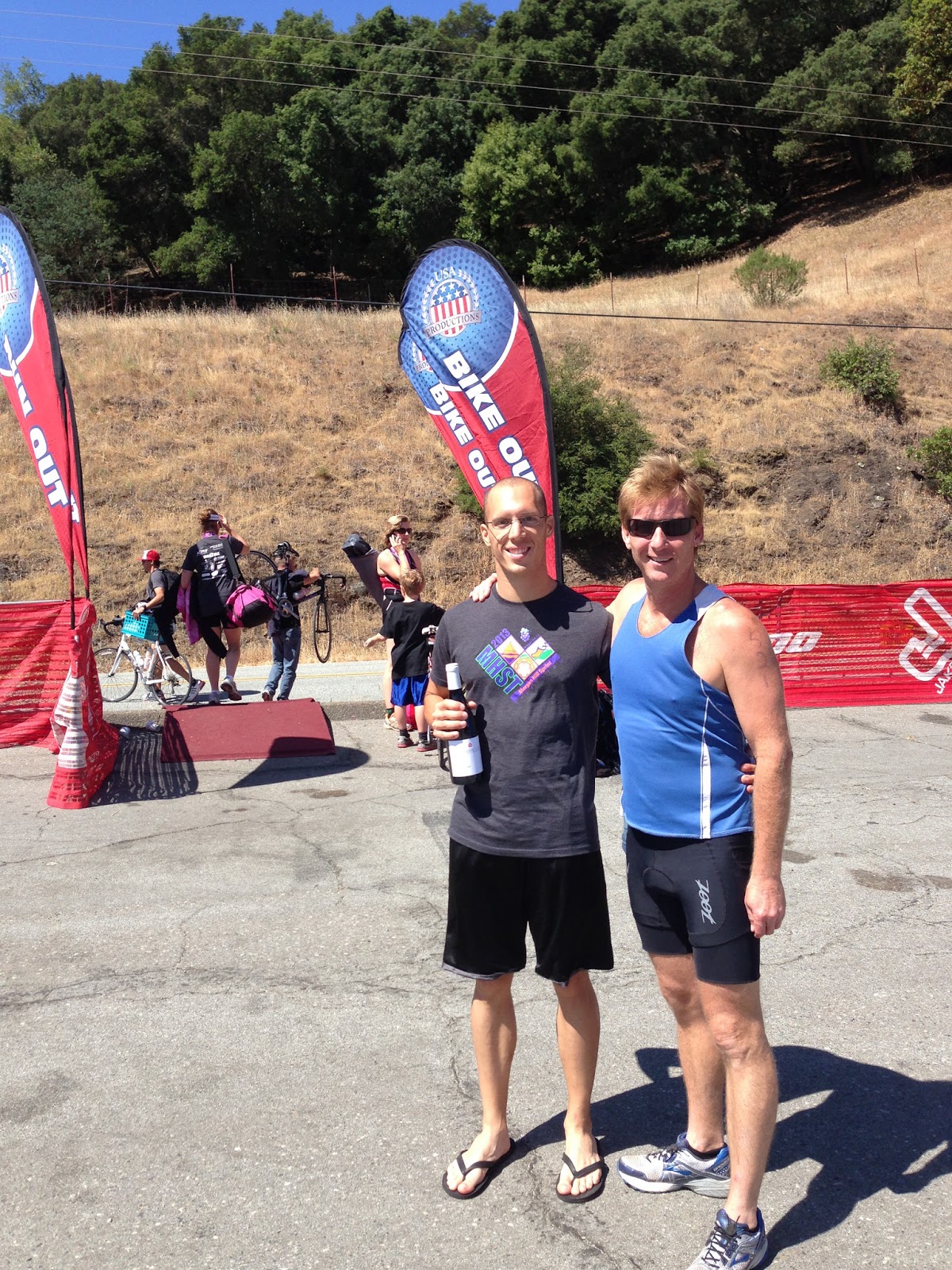 Picture cred: http://captivatingsportsphotos.net/  Sorry for borrowing your proofs!
Posted by Adam at 7:18 PM