I just noticed this never was posted (saved as a draft,) so I'm publishing it now...

We got to sleep in today!  Day 2 started off at a more reasonable 6:30am with a light snack before heading out to the Ironman Whistler course for a morning aquathlon.  The plan was to swim around the two sailboats (about a half mile) and do a three loop 6k run.  Just like yesterday, I came out of the water in 7th after just over 12 minutes.  I started off the run at a pretty chill pace.  My plan was to take it easy with my foot, but as soon as I got to the first turn-around and saw John about 40 seconds up, that plan immediately went out the window.  I took the pace up to around 5:50/mi which felt slightly uncomfortable but manageable.  I started picking people off, but by the end, I just couldn't get Newsom.  I debated putting in a monster effort to try and catch up, but as soon as I saw John glancing back, I knew it would be a lost cause.  Still, I was pleased with second despite possibly burning a match for the KOM later.
After a short ride back to the hotel, a shower, and breakfast, we were out on the road headed to our next destination.  My mantra was the same as yesterday: "Save it for the climb."  The first 35 miles was mostly downhill and pretty chill.  I stuck with the group and avoided pulling at all costs.  About five miles in, I had to go to the bathroom, but I couldn't risk losing the group.  However, Molina had the right idea.  I always thought it was a myth, but today I actually witnessed someone piss off the side of their bike while riding.  Sadly, I do not have the bike skills to give that a try after almost crashing while taking off my vest.
The big event of the day was the Joffre Lakes climb.  The KOM competition has been on my mind for weeks.  If there was ever a time that I was going to bury myself at camp, this was going to be it.  I knew Zach was going to give me some trouble, but everything was still very much unknown.  I decided that the best plan was to ride MY race.  I knew what I could do for this climb, and I knew what would make me hurt.  The plan: 300 watts as steady as possible.  On a fresh day, I could push that higher, but after some solid riding and running at camp already, it needed to be adjusted.
I took the lead immediately after the start.  Zach was on my wheel which made me a little anxious.  After about a half mile, Zach put in a big effort to get ahead.  He made the right move in putting in enough distance to "break the spring" and got about 25 meters ahead.  I resisted the urge to go and maintained my steady pacing.  I could see Zach slowly pulling away, but I was banking on him blowing up at some point and catching him later in the climb.  The minutes and miles ticked on, and it wasn't until about 35 minutes into the climb that I got comfortable.  I had just over three miles left.  This was familiar to me.  My favorite local climb is three miles, so it was time to push hard to the finish.  Something weird happened though.  I cramped in a weird spot in my left thigh, and I realized I made a mistake.  I hadn't drank a single thing since the start of the climb.  Dang.  After immediately burning through an entire bottle, the cramp went away.  I could see Zach off in the distance still, but there just wasn't enough runway to get him.  Again, I'd have to settle for 2nd and lost the KOM by 60 seconds.
When I realized it was lost, I debated shutting it down and saving the effort for another day.  However, this is Epic Camp.  I would most likely have only one shot at this climb, so I decided to go for my secondary goal of front page on Strava.  This would take a sub-60min climb, and I was on track for that.  I was pretty happy to finish the climb in 55:41.
After the big KOM, the rest of the ride was pretty chill.  It was almost entirely downhill, so I just stuck with the pack, drafted when I could, and pulled occasionally.  The ride down to Lillooet included some of the sickest views I've ever seen.  These mountains are like nothing I could have ever imagined.  I stuck with Petro and Zach on the way down, and thankfully they wanted to stop at some good photo opportunities.  Hopefully they turned out already!
So how am I doing?  This is a question that quite a few people are asking me.  In short, I'm doing well.  I'm managing my fatigue well, the company is terrific, the views are spectacular, and I'm reasonably competitive in the races (well, except swimming.)  My plan is working out well.  So far I'm focusing on camp minimums, keeping my effort in check, and being decisive in my pushes.  I'm super lucky to be a climber on the bike.  The rollers seem to be eating into peoples' legs and affecting me relatively minimally.  I can feel some building fatigue, but it's not as bad as I thought it would be.
The internet here in Lillooet is questionable at best, so I'll add pictures later. 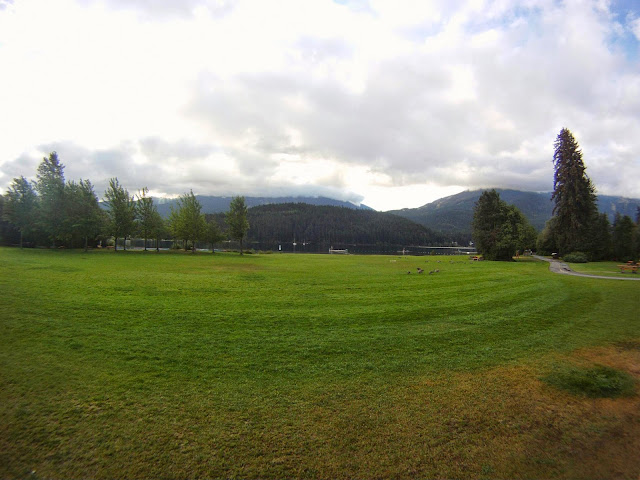 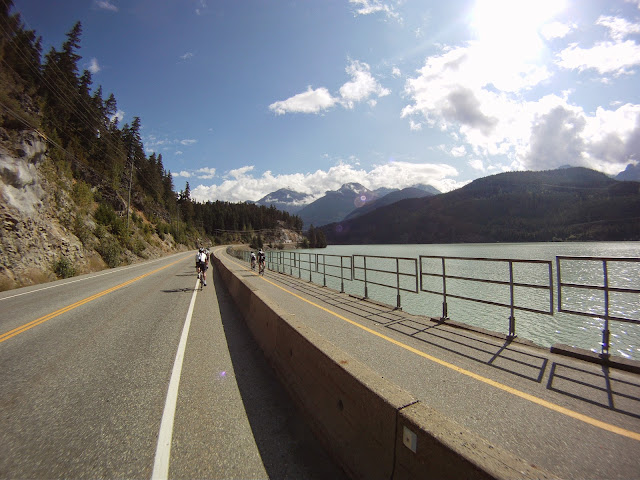 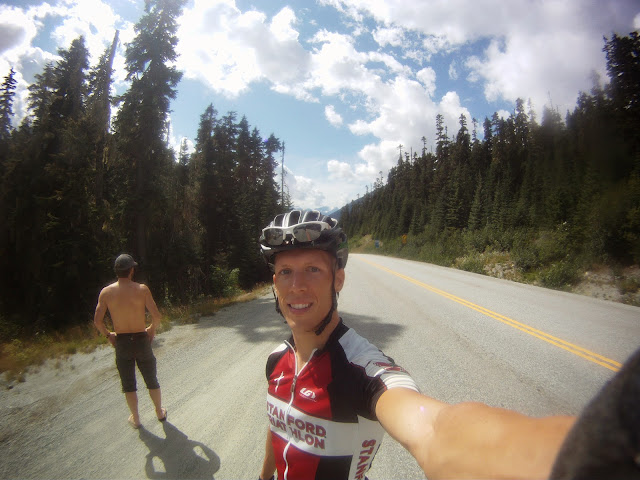 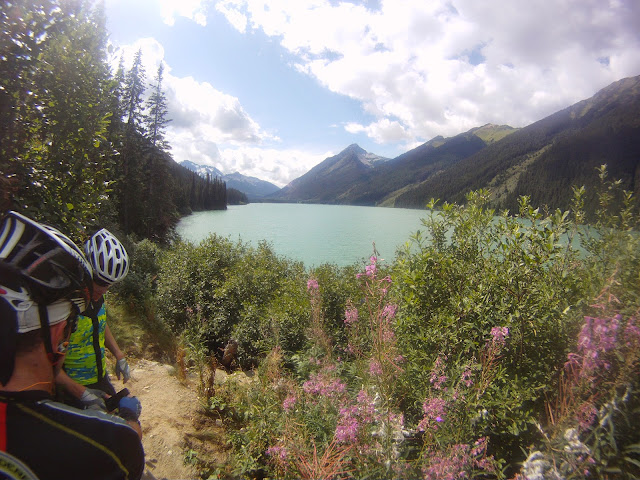 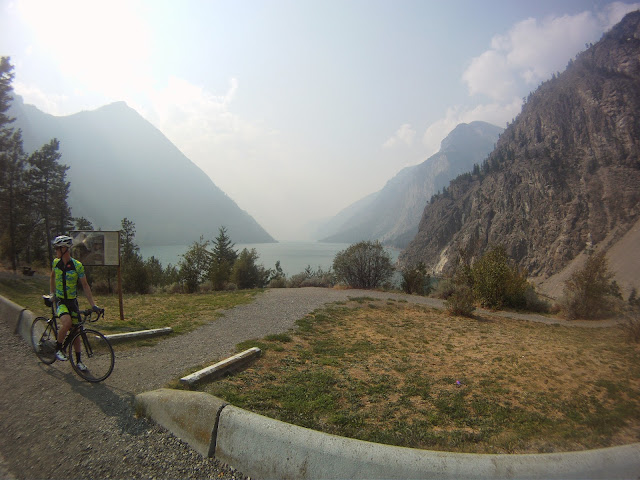 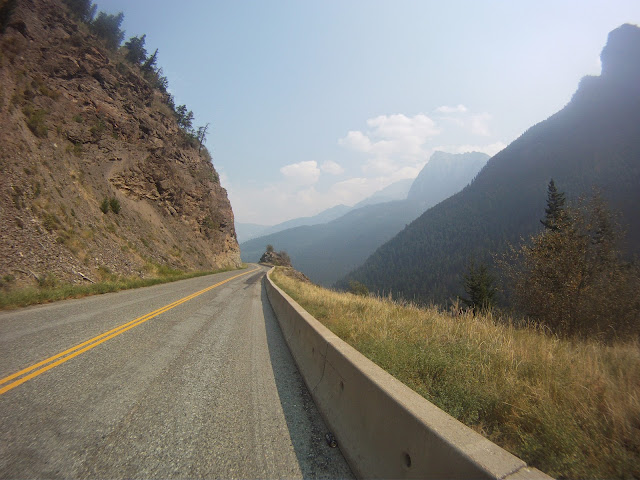 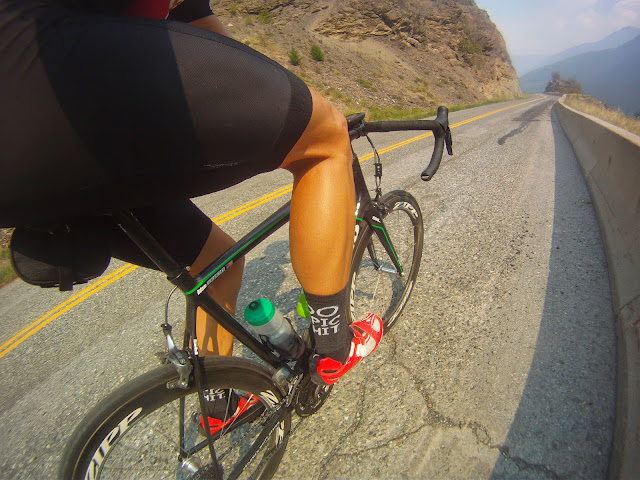 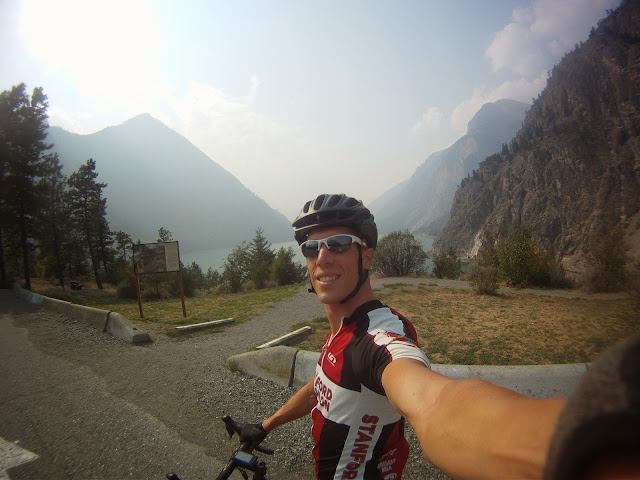