A few months ago when I just started this whole running thing, I didn't really have any particular races in mind.  I was just running because it felt right and because I wanted to be a better runner.  But of course the competitor in me eventually said it was time to race.  I didn't want the pressure of PR'ing anything, so the best candidate was a trail race.  Naturally I wouldn't pick anything easy, so I went with The North Face Endurance Challenge half marathon distance.  13.5 miles and 2600 feet of elevation.  Sounds challenging?  Perfect!

The morning of the race started pretty damn early.  5:30am to be exactly.  The race didn't start until 8am, but the only way to get to the start is via the shuttles which left at 6:30.  Typically I don't sleep before races, and this was no different.  I was wide awake as soon as the alarm went off.

The rest of the journey to the start was fairly uneventful.  Breakfast, zero traffic, tons of parking, shuttles.  I think we got to the starting area just after 7am.  PLENTY of time to relax.

The gun went off at 8am.  My goal for the race was to try and stay with the lead pack as long as I could.  That went out the window almost immediately.  It was just over a mile to the first climb, but things were already broken up.  I felt decent, but I didn't really have any desire to chase the leaders.  The race is about an hour and a half, and I didn't want to blow it in the first five minutes.  Patience was the key.

The first climb up Miwok was my first low of the day.  On the first climb!?!  Yep, I felt flat going up.  At least ten people must have passed me on that climb.  Maybe it was patience again, but I don't think I could have hung with those dudes if I wanted.

I started to feel OK again once we hit the descent into Tennessee Valley.  I had a lot of ground to make up, but it was still early in the race.  I chose NOT to break any ankles today and just maintained the distance to the guy ahead of me.  I eventually passed him in the valley on the way to the next climb.  It wasn't a decisive pass...kind of a half-asses pass, but I never saw him again.

The second climb was up the coastal trail and fire road.  Let me tell you - this one is a bitch.  It is by far the steepest climb.  I felt a little better on this one and passed a mountain biker and one other guy, but it still felt like I was crawling.  I guess steep trails just do that to you?

Coming over the top, I passed one more dude.  I couldn't quite gauge his descending skills, so after a few steps to transition my legs from uphill to downhill mode, I took off.  I did NOT want to get repassed on a descent, so I threw caution to the wind and descended like I hated my joints.  I'm pretty sure I aged my knees at least ten years coming down the Fox trail.  It was steeper than the coastal fire road, and I let gravity do all of the work.

After a quick tour de Tennessee Valley again, I was once again heading up, this time on the Marincello trail.  The difference here was that I saw no one.  Not in front of me (ok maybe there was a shadowy figure off in the fog,) but definitely not behind me.  This probably contributed to my lack of drive up that last climb, but I just focused on being "in the moment" rather than focusing on how much more climbing I actually had to do.

Coming off the last summit, I knew it was party time.  My overly ambitious pre-race plan had me making my move right here at the top of the Rodeo Valley descent.  I was going to "spread my wings and fly" since this one is pretty mellow grade-wise.  Although I wasn't in a battle for the lead, I did follow the plan and beastmoded the descent.  My joint-crushing efforts netted me one place higher, and I could see one more guy about 50m up.  I didn't know it at the time, but that guy was 3rd in my age group.

I tried hard, but I couldn't catch that dude towards the end.  It was an uphill finish, and I had no more fight left in these old stumps.  Finishing four seconds back from a bunch of free North Face stuff kind of sucks a little, but I hit my goal time of sub-1:35 (finish time was 1:34:43.)  I can't control the competition, but I can control my own race.  9th overall and 4th in my age group is definitely something I can be proud of.

The best thing about this race?  I can finally shave this awful beard off my face!  For those of you who had the (dis)pleasure of seeing me during Movember, I grew the worst excuse for a beard in tribute to trail runners everywhere (much greater men than I.)  I'm happy to say that on Dec. 7th, I am once again cleanly shaved. 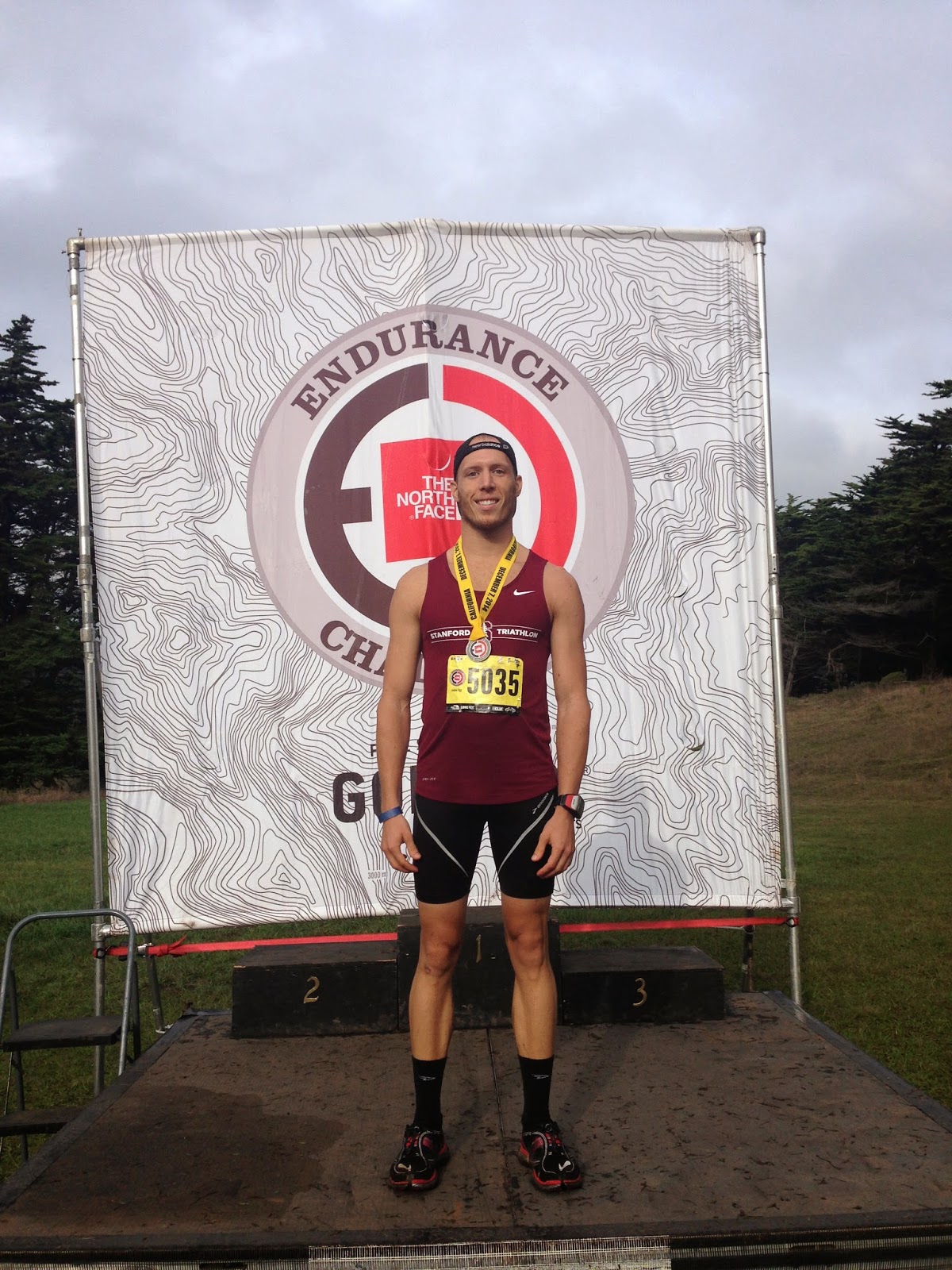 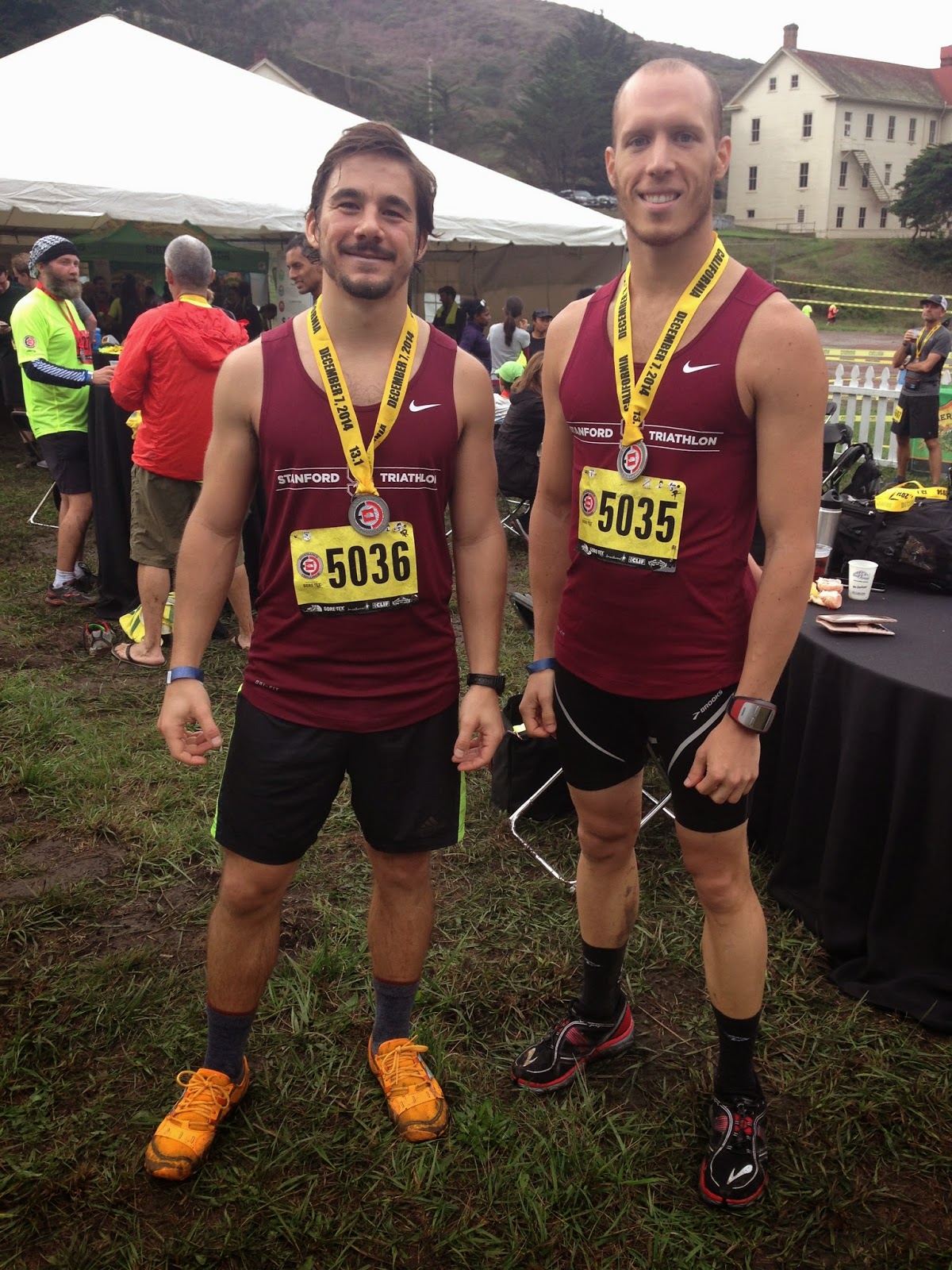 Pro race pics (there are some cool ones here)