It’s always a little tough choosing where to begin these things.  A race isn’t just a race.  For me, it began roughly two weeks before when I drove up to Kirkwood Ski Resort to spend some time at 7800 feet with my friend Astan.  My plan was to work remotely while acclimating to the altitude. 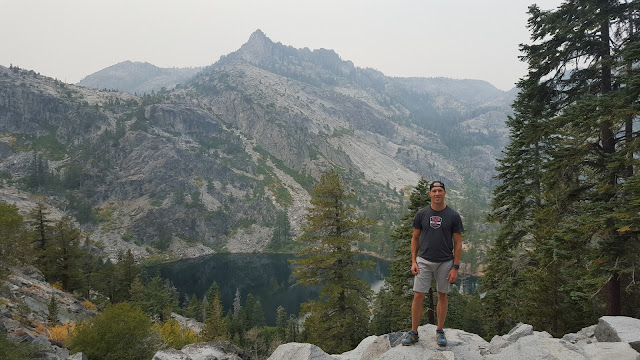 Astan and I loosely followed a two week taper plan, but I added a little extra swimming.  Actually, the entire first week, I swam all seven days with a few swims equal to or greater than the Ironman swim distance.  How could I pass up the opportunity to swim open water EVERY single day??  This was a huge confidence booster. 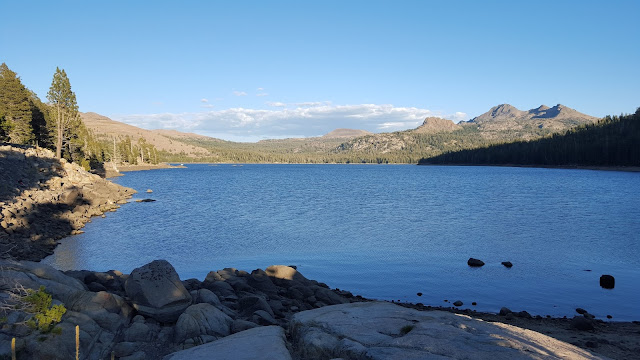 At the beginning of race-week, things took a turn for the worst.  Astan and I were out on probably our last moderately hard ride, and while descending the west side of Carson Pass, I went down on my bike at about 35mph.  We were in a construction zone, and when I came around a curve, I saw a construction truck driving straight at me.  As you would expect, I 1.) shit my pants, and 2.) panicked.  While trying to brake and swerve, my back wheel lost traction, and I slid down the most beautifully paved, brand new pavement and into the ditch.  Nothing was seriously broken (me or the bike,) but there was definitely some cosmetic damage.  I’m still wearing the tegaderm as I type this…


My original plan was to head to north Lake Tahoe on Wednesday, but due to the bike crash, I opted to leave Kirkwood on Tuesday to get my bike checked out in Truckee. 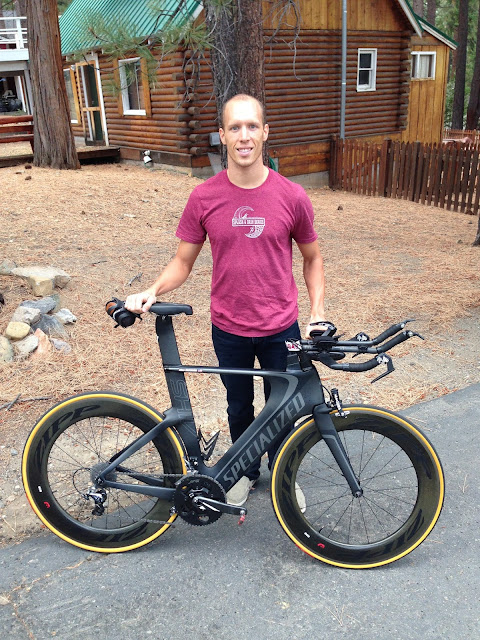 I checked into my Airbnb on Wednesday, and people started arriving later that day.  I rented a pretty large place, and invited quite a few people to stay with me.  This was important to me.  In the past, I’ve done races where it’s just me and my parents.  If I don’t have a lot of people around me to distract me from the nerves, I tend to go a little crazy with anxiety.  It was great to have everyone under the same roof.


Once the events got going, the time passed way too quickly.  Thursday checkin.  Friday to chill.  Saturday bag and bike drop-off.  Sunday RACE!


Race morning started around 4:45am.  I tried taking some natural sleep aids to maybe, just MAYBE sleep before the race, but as usual, I didn’t sleep for a second.  I was wide awake by the time the alarm went off.  After stuffing down some breakfast and grabbing our stuff, the race crew headed down to Kings Beach around 5:45.  It was incredible to just walk a half mile down to the start.  There was absolutely no stress getting everything set up in transition until…


I forgot my goggles!  Shit!  I looked everywhere for my dad to see if he could grab them from the house, but I decided to just do it myself.  Instead of warming up in the water, my warmup included a one mile jog to and from the house.  Again, another reason why I’m so happy that I rented the place that I did!  I did manage to get a warmup in the water, but it consisted of running waist deep in the water and peeing just as they called everyone back to the start line.


6:40am the cannon went off.  I was a few rows back, and I slowly jogged into the water with everyone else.  It was a super chill start.  People were smart to not go crazy into the water.  About 100m from the shore, we were finally able to swim. 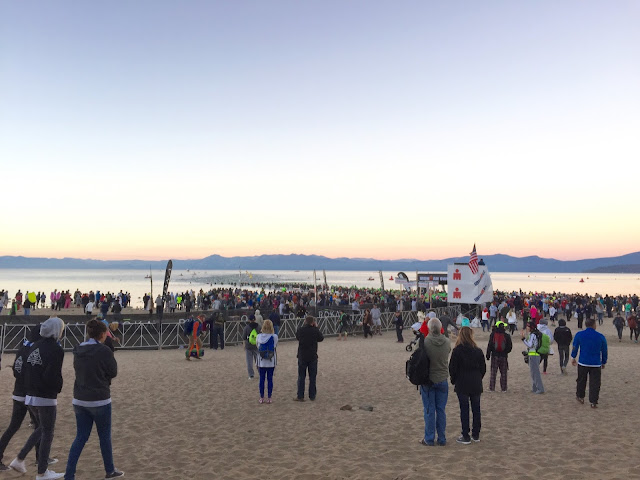 The swim itself was perfect.  The sun was still behind the mountains, so there weren’t any sighting issues.  The water was cool, but with a wetsuit, it was perfect.  It was a mostly drama-free swim, but about 200m from the finish, someone hit me in the face and dislodged my goggles.  I had to stop and clear out the water, and yes, I made him pay for that. :)  Swim time was a huge PR in 55:56. 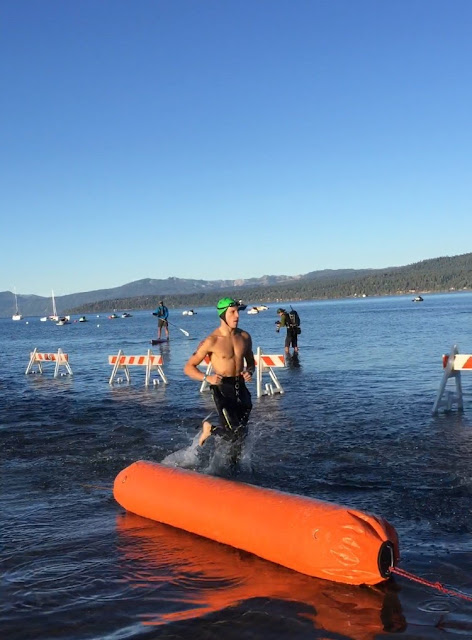 
T1 was decent.  Apparently I had a blazingly fast transition.  I pulled my wetsuit down to my waist.  Thankfully the arms came off easily; usually that doesn’t happen.  The wetsuit strippers helped me with the rest.  Once I got into the changing area, I took off my speedo, pulled up my bib shorts (by myself this year!!,) and put on my jersey, helmet, arm warmers, vest, and socks.  I grabbed my shoes and sprinted for the exit.  Once I got to my bike, I put on my full fingered gloves which were nice and toasty due to the chemical hand warmers which I taped to my aerobars.  Once my gloves were on, I sprinted for the mount line where I put on my bike shoes and went on my way.  I spent months thinking about how to perfectly optimize T1 after the 19+ min transition in 2013.  So with a time of 5:42, I would consider that a huge victory.


Then I crushed the bike.  I immediately noticed that my power meter was dead.  I don’t know for sure, but my suspicion is that the cold overnight killed the battery.  DAMN!  I bought it specifically so that I could pace an ironman, and now it’s completely useless.  I had to rely on perceived effort for this ride, and history tells me that I tend to hammer pretty hard.  So instead, I tried to play it smart.  I went a little hard for the first loop, but I consciously tried to go pretty easy on the second and final one third loop.  I went as easy as I possibly could go on all of the climbs.  Never once did I feel like I was pushing harder than I could go. 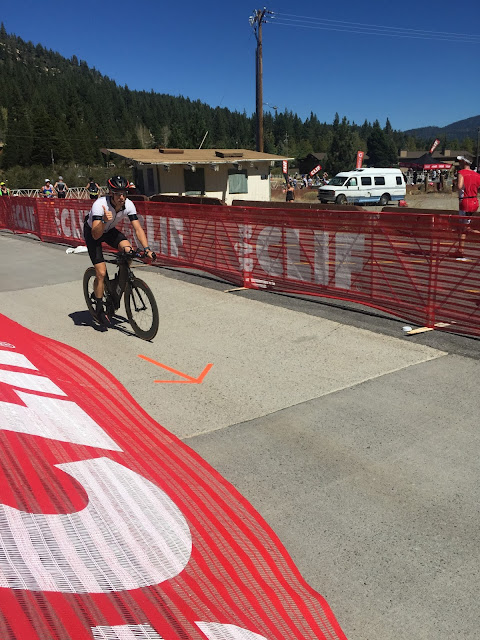 
Nutrition was mostly on-point.  I ate about half of what I carried with me.  It was pretty hard to chew, so instead I started grabbing Gu’s at the aid stations and drank as much gatorade as I could.  I was also peeing like crazy.  On the first loop alone I peed at least five times.  I also peed on the final Brockway Summit descent.  I have no idea how I had so much water in my body, but I feel like I did it right.


I got off the bike in seventh place after a 5:14 bike split.  This made me feel pretty great.  I knew I was in good bike shape, and this pretty much confirmed that I could hang with the top guys.


T2 was also pretty solid.  I wanted to do a full change into run gear since that’s how I’ve been training.  I also knew it would be pretty warm later in the day, so I went with loose shorts and my Stanford tank top.


The run itself wasn’t great.  Immediately coming out of T2, I could tell that things were going downhill quickly.  I don’t think I over-biked, but I could tell that my run wasn’t going to be spectacular.  Headed out of Squaw, I was running a conservative pace of 7:15/mi.  I felt like this was reasonable given where my run fitness was at.  After a few miles, that slowed down to ~7:45/mi.


I held on until mile 9.  That’s when I first had to start walking.  The pain my quads was off the charts.  They weren’t cramping, but there was an intense, searing pain that I just could not deal with.  For the next 17 miles, I held on the best I could.  I ran when I could and walked when I couldn’t.  I drank water and cola at every aid station.  I took four ibuprofen at the run special needs at mile 13.  Nothing helped.  Mile 13 was the worst.  That’s when I saw my Kona slot slip away.  I walked through special needs, and my Kona slot had strong stride ripping right past me.  My marathon time was 3:45.  That’s a decent Ironman time, but it isn’t anywhere close to what I felt I could run. 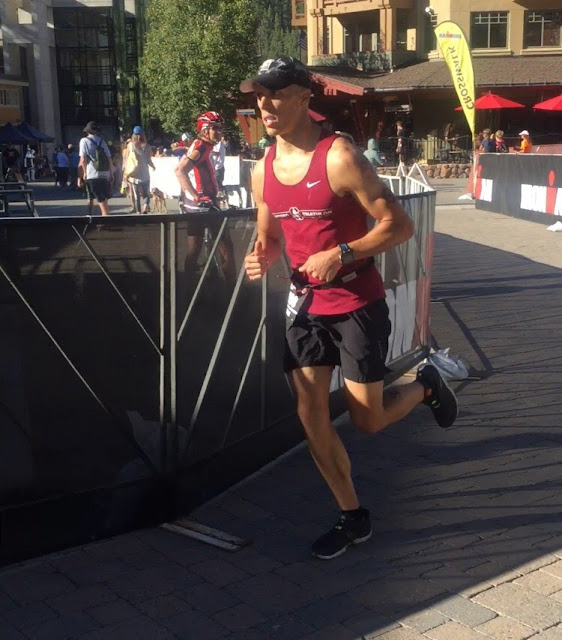 
Finishing the race is always incredible.  I had no idea at the time, but I finished in 10:03.  Three minutes away from breaking the ten hour mark.  At Lake Tahoe.  Probably the hardest ironman on the entire circuit.  Unfortunately my age group was beyond stacked (isn’t it always??,) and I missed out on a Kona slot.  Top five took Kona slots, and I ended up eighth in my age group and 17th overall. 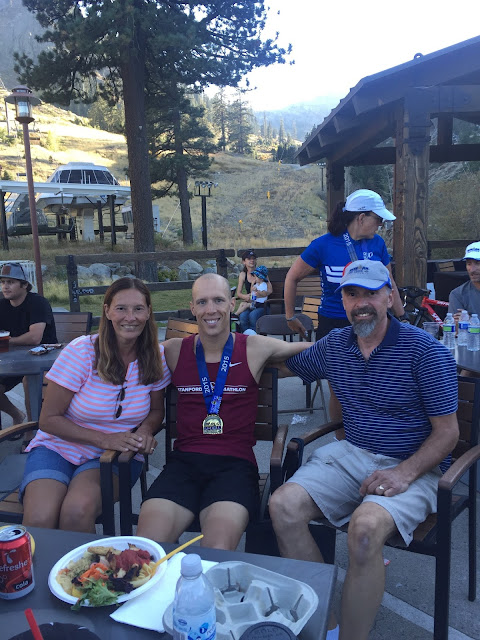 
I’m also bummed that I didn’t get to “show off” my run fitness.  It’s hard to describe how proud of my running I am.  I love running, and I LOVE running fast!  Flying with my wings clipped is an absolutely terrible feeling for someone who loves to run.


Lastly, missing the podium was also a huge downer.  At the awards ceremony, I got a little emotional when they called up M30-34.  I felt like I should have been there.  I felt like I deserved to be there.  But I wasn’t.


The excitement didn’t end after the race either.  On the way home, I was driving on I-80, and my bike fell off the bike rack on the back of my car.  It sustained some serious damage, and I’m not sure if it’s rideable.  It is still in one piece though, so I’m happy about that.  I don’t exactly know what happened, but the rubber bands that held down the wheels broke causing the bike to drop onto the highway.  I pulled over and waved my arms until all four lanes of traffic stopped so that I could run into the road and grab my bike.  This was an absolutely nightmare.  What a crazy two weeks…