Today got off to a bit of rocky start.  Traveling is always a nightmare, and this time was no different.  Somehow my bike never made it to Paris, so I had to ride a rental today.  The rental is actually quite nice though.  It’s a Rose bike, and I’ve always liked German engineering. 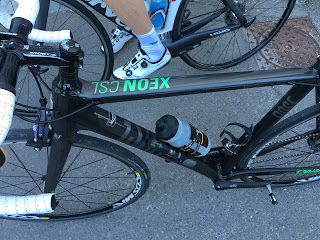 Due to traveling issues, I didn’t get to Marseille until midnight last night, and with a 5am wakeup, things were going to be a little challenging.  I think I got about 20 minutes of sleep last night, and since I was already awake before the alarm, getting up wasn’t too difficult.
We started the day with a bit of a swim competition.  Sadly, since I packed my wetsuit with my bike, I had to try and swim in just a speedo today.  I took three strokes in the Medditerranean and said there’s no way.  The water was way too cold.  Instead I went for an easy run and took some nice pictures. 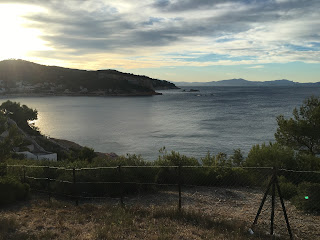 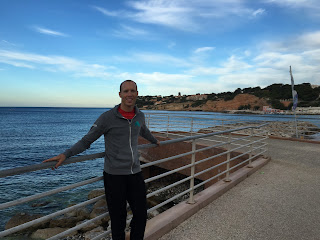 The bike ride for today was promised to be huge.  And it delivered. :)  After riding for 70 miles, we found ourselves at the base of Mont Vonteux.  This is an absolutely gigantic mountain: The route we would take to the top would cover 13 miles and ascend 5000+ feet.  That is massive!
About 25 minutes into the climb, John Newsom passed me for the lead.  This sucked.  Physically I couldn’t push much harder with the last of climbing gears, and mentally I didn’t think I could catch up with Newsom.
And then a miracle happened.  Somewhere before the 6k to go mark, Newsom exploded and left a massive crater on the ground.  There was support stationed at 6k to go, and Newsom pulled off to drink some coke.  When I saw that, I was almost furious.  How could he do this now?  He was winning by  a considerable margin, and then he stops?  What the heck??  Apparently later I found out that he could barely push 200w, so it sounds like he was not in good shape.  I pushed for the summit and made it in 1:38.  I missed my goal by eight minutes, but it doesn’t matter that much.  I gave it my all (which arguably wasn’t much,) and ended with the King of the Mountains jersey. Due to missing the swim this morning, I’m a little behind on yellow.  Three points exactly.  That can be made up pretty quickly.
Posted by Adam at 2:18 PM